A development of seven much needed new affordable homes to rent by local people in the village. 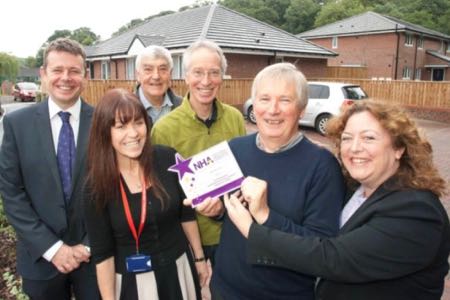 Scheme outline
Stocksfield is a prosperous rural commuter village in Northumberland, where no new affordable homes had been built for 25 years. But then the community decided to build homes themselves.

A group of like-minded residents in Stocksfield recognised that the population was ageing, and it was also becoming ever harder for anybody not earning a substantial salary to afford to live there.

The next generation was moving elsewhere, sometimes for work, but sometimes simply because they had no choice – there was nowhere affordable for them to live – whether buying or renting. So Broomley & Stocksfield Parish Council approved the formation of a Community Land Trust (CLT) through the local Stocksfield Community Association.

This CLT (linked to the Stocksfield Community Association) brought forward plans to develop a derelict site next to the village tennis club, along with a small additional site where former public toilets stood.

SCATA formed a partnership with one of the largest housing providers in the North East, Isos Housing, to work on their development of seven much needed new affordable homes to rent by local people in the village.

All the properties have been let through a Local Lettings Policy to ensure those in need from the local area can benefit from the new homes – four flats and three bungalows.

Need
An extensive Housing Needs survey identified an acute shortage of affordable rented homes in Stocksfield. The village is very prosperous, with a high percentage of owner occupiers, and a small number of private rented homes.

Isos is the main social landlord with a presence in the community, but turnover of these homes is slow, with the population very stable. The Parish Plan identified the need for more affordable homes but local residents were concerned about any new developments being built on green belt as the village sits in a beautiful rural setting.

A consultation questionnaire was sent to all 1,200 households in Stocksfield and there was huge public support for the need for affordable housing – for example, from those who had family wanting to live in the village or who had left and now wanted to return to care for elderly residents.

A key objective of SCATA and the partnership with Isos Housing was to develop the new affordable homes on brownfield sites to help minimise their environmental impact and protect the green belt.

More than 60 people applied for the homes through the Homefinder choice based lettings scheme, demonstrating the importance of building new homes.

Good practice
The community in Stocksfield deserves huge credit for taking the lead in creating their own Community Land Trust, to take control of their own destiny, and ensure that they could retain influence over the new homes built for generations to come.

The Guessburn development also required some innovative thinking to unlock the site, as there were several different landowners involved, and the Scout Association owns a building at the rear of the site, so access had to be maintained from the highway.

The sale proceeds from part of the site were reinvested into sports facilities elsewhere in Stocksfield, enabling an extension to the local cricket club pavilion. Funding HCA £365,000 Isos £535,000

“What we have achieved through SCATA is important. It shows that, with a bit of imagination and a lot of determination, a community like ours can lead the way on providing high quality affordable rented homes.”
Pete Duncan, SCATA Chairman

“In a rural environment where it can be difficult for people to get on the ladders of opportunity, for jobs, for transport and housing, this scheme is a great antidote to that.”
Alan Milburn, former cabinet minister and Stocksfield resident