A redundant, but locally important building converted to homes for local elderly people. 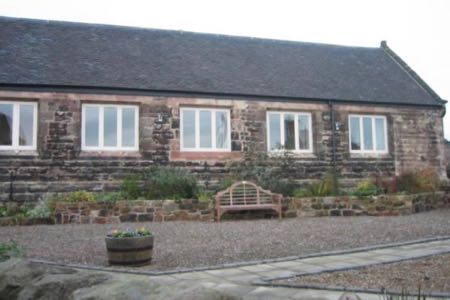 Scheme outline
In 1999, a Victorian school was converted into four flats for older people. The school became redundant when a new primary school was built for the village. It remained owned by a local trust which was keen to see the building used for the benefit of the village. PDRHA become involved and was granted funding to covert the building into one 2 bedroom flat and three 1 bedroom flats.

The building converted readily into single storey accommodation. The original floor level was low so that pupils were not distracted by the outside world. The floor was lifted to enable residents to enjoy these views. Platform lifts were supplied to give easy access.

The school had two playgrounds, one provided amenity space for the flats; the second, which had no direct access from the flats, became a community garden. A group of local enthusiasts gathered funding to convert this space to a garden with trees, flower beds, seats and a sculpture. The space remains an asset for the village and residents.

Need
The local trust which owned the school saw that there was a need for older persons accommodation in the village. The local District Councillor, who was also a Trustee was particularly aware of the situation of several older people who were struggling with unsuitable housing. This was confirmed by the local authority.

The conversion also provided a new use for a valued building in this Peak District village.

Good practice
PDRHA worked closely with the Trustees of the school and the local parish council to bring the idea to fruition.

“It was wonderful that this building was converted to flats which have provided homes for local people. It was particularly well done, the appearance of the building did not change much at all and it’s an important building in our village. We needed more homes for older people as its important they can stay in the village close to their friends and relations. The garden was a nice addition; it continues to bring enjoyment to the village.” Local District Councillor, Linda Malyon.